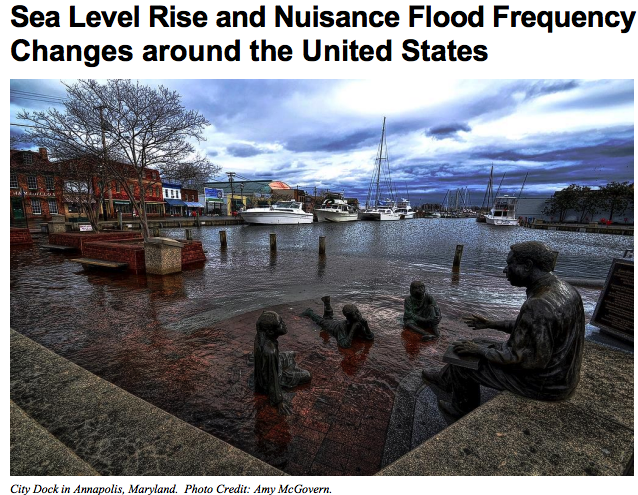 The National Oceanic and Atmospheric Administration (NOAA) water level (tide) gauges have been measuring water levels around the U.S. for over a century, providing clear evidence of sea level rise relative to land (SLRrel) around most of the continental United States and Hawaii. As SLRrel increases mean sea level (MSL), there is naturally an increase in tidal datum elevations, which are typically used to delineate inundation thresholds. Direct consequences of rising sea level against fixed elevations such as today’s built infrastructure also include increased inundation during extreme events both spatially and temporally. Not only are extreme flooding events reaching higher grounds and covering larger areas due to SLRrel, the frequency and duration of these extreme flood events are increasing. Another consequence of SLRrel is the increase in lesser extremes such as occasional minor coastal flooding experienced during high tide. These events are becoming more noticeable and widespread along many U.S. coastal regions and are today becoming more of a nuisance. As sea levels continue to rise and with an anticipated acceleration in the rate of rise from ocean warming and land-ice melt, concern exists as to when more substantive impacts from tidal flooding of greater frequency and duration will regularly occur. Information quantifying these occurrences to inform mitigation and adaptation efforts and decision makers is not widely available.